in Work and Play

DEFENSE AGAINST THE DARK ARTS 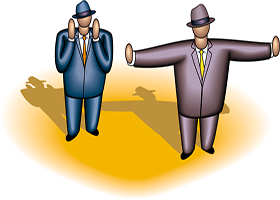 99 Ways to Win an Argument

In a perfect world, best ideas win. Yet we've all encountered the argumentative bully who takes the logical equivalent to a short cut to win a debate. These 99 logical fallacies, courtesy of www.constitution.org, will help you call these masters of sophistry on their errors!

Appeals to Emotions instead of Fact or Logic

Fallacies of Definition or interpretation