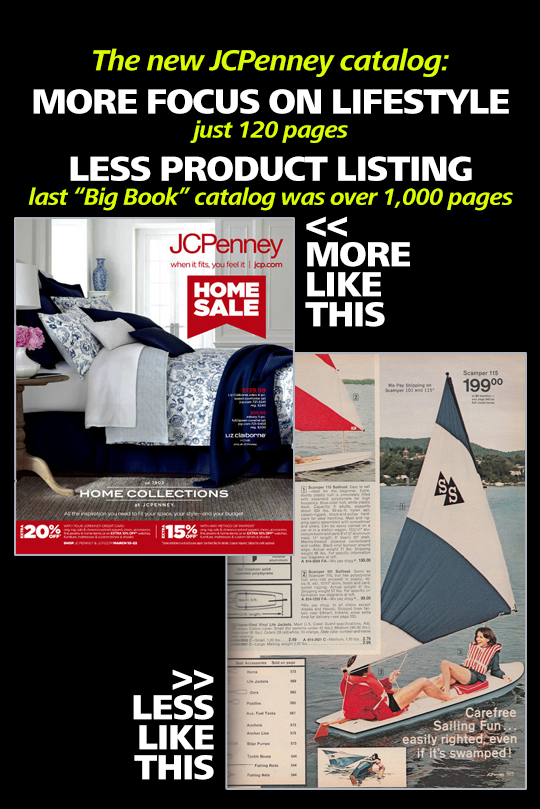 The new incarnation of the JCPenney catalog will
feature more of a magazine look and feel.
The value of direct mail got a huge validation when retailer JCPenney recently announced that it is again betting big on print by relaunching its flagship catalog. The new incarnation will be a more lifestyle-oriented look book, the goal of which will be to drive customers to a retail store or the company's website.

The iconic JCPenney "Big Book" catalog was discontinued in 2009. At its peak, it contained over 1,000 pages and offered a broad range of categories and a comprehensive set of products. The new catalog, about one-eighth the size of the previous "Big Book," will feature only products in the home goods category and will be set in a more lifestyle-oriented presentation. JCPenney's strategy seems to be to drive traffic to both its website and its vast network of stores, especially in the midwest.

Historically, home goods have been one of Penney's top-selling items, with the home category accounting for 40% of online sales.

JCPenney is representative of the vanguard of savvy retailers who are using print catalogs again to drive web and foot traffic. Study after study has shown a marked, statistically significant, causal relationship between catalog mail volume and the overall performance of both featured items and the brand itself.

This trend is evident in research by the US Direct Marketing Association, which compiles statistics from direct response printers like Holland Litho. The association reported that 2013 saw the first uptick in year-over-year catalog volume since 2007. Overall catalog volume is still well below its 2007 peak of 19.6 billion. In 2013, the last year for which data is available at the time of this writing, the volume was 11.9 billion.

But back to JCPenney. Sales plummeted after JCPenney discontinued the catalog in 2009. The company scrambled to identify the problems and try to fix them before it was too late. Their research showed that a lot of what they thought were online sales were actually catalog shoppers using the website to place their orders. This explained JCPenney's disastrous performance following the elimination of the Big Book.

According to management consulting firm Kurt Salmon, 31% of shoppers have a catalog with them when they make an online purchase. The research is in and retailers are once again seeing the clear benefits of using catalogs as an essential tool to drive sales. In addition to JCPenney, J. Crew, Williams-Sonoma, Bloomingdale’s and Saks Fifth Avenue have all added catalogs back into their marketing mix. Even web-oriented retailers are getting on-board: Upstart retailers like Bonobos, a hip men’s retailer, mailed its first catalog in 2013.

JCPenney CEO Myron Ullman observed recently that the kill-the-catalog strategy was a disaster. “We lost a lot of customers,” he observed. Wow. No one thought to test this strategy first? Remember to validate the idea before you implement it.